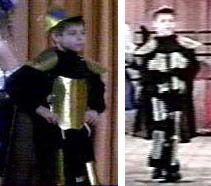 Alien Moon Robot. My youngest daughter had a concept that she wanted to be a robot from the moon with a round head and a form fitted body (no boxes with dryer hoses for her). Her helmet is made from a Scooby Doo playground ball from ToysRUs. I cut it out to fit over her head/face and spray painted it silver. There are 10 "buttons" on the control panel on her chest and the silver box hides the battery. You switch on the battery and the lights flash. I made the buttons by gluing curtain rings together, wrapping them with silver thread, and gluing clear plastic over the top. Too bad you can't get the full effect in the pictures. But she really turned heads as she trick or treated around Noe Valley in San Francisco with her chest a-flashin'! I also made silver spats for her shoes, as she didn't want anything non-metallic to show.

The costume suffered ill effects from the other kids pushing her buttons - literally. They loved it when she turned them on via the switch in the battery pouch and they flashed.

Retrieved from "https://costume.fandom.com/wiki/Robot?oldid=3774"
Community content is available under CC-BY-SA unless otherwise noted.